The 3 Stances of Offensive Linemen 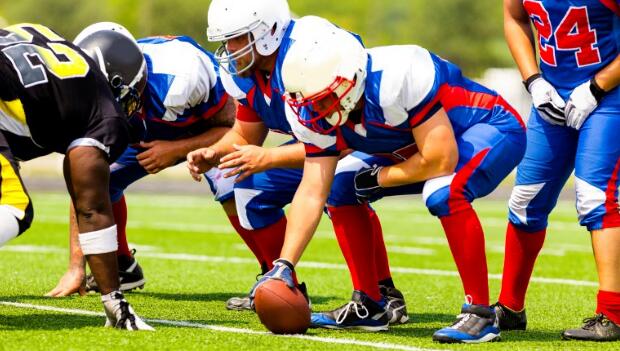 Offensive linemen usually line up in three different stances, depending on the situation of the game. A player may have a natural affinity for a particular stance, or even have modified a stance to his liking, but a coach should be sure to use the best stance for each specific instance. Here is a breakdown of the three offensive line stances, courtesy of the eteamz football community.

The two point stance has the lineman in a stance where the fingers are not touching the ground. Neither are the player's hands to rest on the knees as this is often an indication of fatigue. The hands should be slightly extended in front of the body, palms down, fingers flexing, elbows tight to the body, knees bent, and slightly bent over at the waist. Weight should be centered on the whole of the foot or slightly shifted toward the balls of the feet, but never on the heels. Feet are shoulder width apart, toes directly ahead.

Many coaches allow the offensive line to use the two point stance in obvious passing situations.

The three point stance continues from the two point stance. The player bends over at the waist and places the three forward fingers of the strong hand to the ground. The rear end drops parallel to the ground as the knees bend. The head is up and looking straight ahead. The strong side foot (the same as the hand) is one foot behind the other foot with the ball of the foot touching the ground. The player drives off with the up foot first.

A good way to test the player's stance is to quickly remove the hand from its anchor to the ground. If the player falls forward, too much weight was supported on the hand. A player should be able to drop his hand to the ground, and pick it back up without obvious torso movement.

A player may have a natural affinity for a particular stance, or even have modified a stance to his liking, and a coach should be sure to use the one best for each specific instance.

See more football drills & tips or find a football camp near you.