Veteran and Ultramarathoner Billy Richards Will Inspire Your Next Race 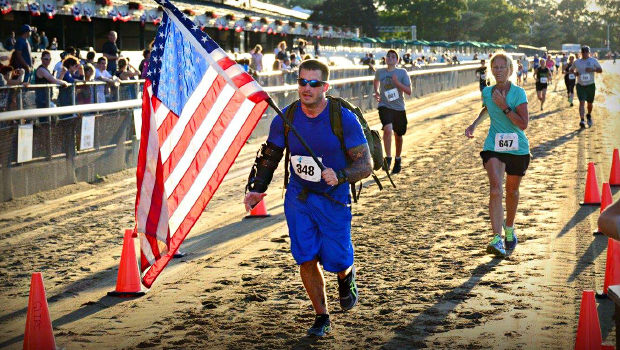 Covered in tattoos and proudly bearing an American flag, Billy Richards is unmistakable in a race crowd.

Since 2014, the United States Marine Corps and Army veteran has completed nearly 200 endurance events, including marathons, ultramarathons and obstacle course races. His race total is impressive in itself—but crossing the finish line isn’t Richards’ main motivation. As his fellow athletes tote water and energy gels, this vet has been shouldering a 45-pound rucksack in races since 2014 and he started carrying the American flag as well in 2015. What’s more, he has completed 150 additional events with the Stars and Stripes alone.

I've seen the blisters on his feet, the fatigue in his face. Nothing stops him.

Richards’ cargo serves as a memorial, and delivers a powerful message.

“I started doing this for training, but also to symbolize the hardships of our military service members,” Richards says.

After completing two deployments during his four-year enlistment with the Marines, Richards served three years in the Army at Fort Bragg. Now living in Islip, Long Island, and working as a personal trainer, Richards has adjusted to the civilian life—and wants to help many others do the same.

Many veterans struggle with substance abuse, homelessness and post-traumatic disorder. They also face a higher risk of suicide compared to those who did not serve in the military.

“So many veterans are fighting the battle on the home front,” Richards explains. “They need our support, and we need to let them know we still care.”

Richards’ dedication is imbued with the steadfast spirit of Semper Fi.

“Billy, without a doubt, inspires me,” says his friend and fellow athlete, Zack Wisnowski. The two met after a BattleFrog Xtreme race in in 2015, and have since competed in many events together.

“There is no quit in him,” Wisnowski says. “I've seen the blisters on his feet, the fatigue in his face. Nothing stops him.”

Recent events have inspired Richards to expand his mission to honor those who serve our country in law enforcement. After five Dallas police officers were killed in a line-of-duty shooting in 2016, he embarked on a 39-city “Thank the Police” tour. Running to each city’s police station, he presented American flags to local officers along with hand-written cards from the donors who made the tour possible.

“The whole goal was to bring a more positive image to the police department, and to show them the community supports them,” he explains.

Later in 2016, Richards ruptured his bicep during a Tough Mudder event, but the injury isn’t slowing him down. While he no longer always races with the rucksack, he never leaves his flag behind. In April and May of this year, he completed one marathon and eight grueling ultramarathons over the course of nine days, bearing the flag through it all. He will round out more than 20 ultramarathons and obstacle course races in 2017.

“My long-term goal is to keep running with this flag as long as my body lets me.”