Why I Run: An Essay from a Marathon Maniac, Ultramarathoner and 50 States Club Member 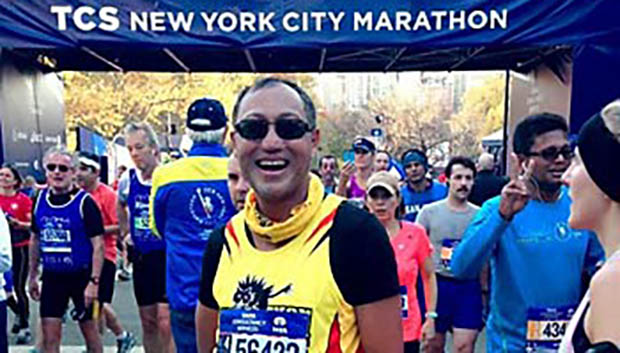 "Why do I run?" I ask myself this same question repeatedly, especially when I am ready to give up while I am running a race. But upon crossing the finish line, my next question to myself is, "Where's my next race?"

I started running 25 years ago when I met my partner, who is an avid runner. But I didn't get serious about it at the time. First of all, I was not into sports in any sense of the word. Secondly, I disliked running because I could not catch up with my partner and I got tired easily. So why do I run? Being a long-distance runner, I will make my story long!

View the original piece as published on Racertrips.com.

The Journey From Grade School to 50th Birthday

I am an only child and was overly protected by my Catholic Mother and my Military Officer Father. I went to Catholic school, and even under the watchful eyes of the priests and nuns, I was bullied because I was short and skinny and was called a weakling. At the time, I detested every form of sports activities, and being in an all-boys school, there were plenty of sports. I could not throw a tennis ball or, what's more, a basketball. During those days, I would go home hurting from all the taunting and name calling, and I was so miserable.

Okay, let me fast forward now. I went to college and to medical school. I came to the United States, and while I was in practice as a Gastrointestinal Pathologist, I was challenged to run a 5K at the hospital where I was working. This was my turning point as a runner. In 2011,  I turned 50 and decided to do something different to celebrate this milestone. I registered and trained for my first marathon, which was the Marathon du Medoc in Bordeaux, France, 400 miles south of Paris.

During the race, I cramped twice and was going to drop out. But a friend of mine reminded me that flying all the way from Chicago to Bordeaux and not even getting a medal was such a waste. That did it. I ran, and I beat the cut-off time of 5:30! I was so proud to earn my first medal. At that time I thought that was my first and last marathon.

One and Done? Not this Marathoner

But in 2013, I ran my first Chicago Marathon. I enjoyed the the race and decided to run it again in 2014. During the race, I met another runner, who later became my running buddy. We decided to run the Naperville Marathon the following weekend. The weekend after that, I ran in Middleton, WI. Then 2 weeks later, I ran my first ultra, a 50K (30 miles) race just outside of Chicago. This was the first ultra sponsored by Arctic Frog, with race director and soon-to-be-friend Rey Letada. I knew right there and then that I was hooked.

With all these races in such a short period of time, I qualified and earned my two stars with Marathon Maniacs. This is an international running group that one needs to qualify to become a member. Yes, three marathons and one ultramarathon in 5 weeks was more than enough to qualify!

To date, I have finished a total of 78 marathons/ultra marathons. As of April 15, 2019, I completed the Boston Marathon and earned my Sixth Star for the Abbott World Marathon Majors. Along the way, I also qualified to be a member of the 50 States Marathon Club. I am one state away from completing a marathon in all 50 states and am 10 states into my second round of 50 states.

What Does the Future Hold?

What else is in store for me? This year, I'm going to earn my medal for completing a marathon in all 50 states, and I have a very ambitious goal to complete 100 marathons by the end of the year. I also have four more continents to run in. Will that be it? Maybe. Maybe not. We will have to see...

So going back to the question, "Why do I run?" In my journey as a marathoner, it has been an adventure and a thrill to see our beautiful country in a different perspective. But the best part of running is the solitude of being alone while I am training and while I am racing. Running has become my "zen," my peaceful space and my form of meditation. In addition, being an avid cook and a foodie, running keeps me fit and healthy. Furthermore, I met some of my best friends through my races all over the country and the world. Now, you all know why I run.

Why Do You Run? If you would like to share your story with the Racertrips community, email info@racertrips.com to find out how.

READ THIS NEXT: How This Runner Went From OCD to the BYC Marathon

Jose Maria H. Gabriel, MD
Gaby ran his first marathon at age 50 in Bordeaux, France, and has since finished more than 78 marathons/ultra marathons. He's a qualifying member in both Marathon Maniacs and the 50 States Marathon Club. In 2019, he ran the Boston Marathon to earn his Sixth Star for the Abbott World Marathon Majors. He's also one state away from finishing a marathon in all 50 states and has set an ambitious goal to complete 100 marathons by the end of 2019.  Gaby is a Brand Ambassador for Racertrips, Nuun Energy, Marathon Maniacs (Illinois and Chicago) and XOSKIN Running Apparel.