Why You Should Run a Short-Distance Rock 'n' Roll Race 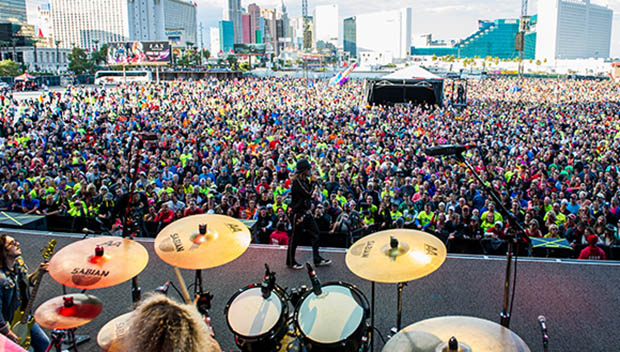 Since 1998, the Rock 'n' Roll Marathon Series has been thrilling runners with world-class events featuring some of the biggest names in music at amazing destinations across the globe. It's no wonder the brand boasts the title of largest running race series in the world. But did you know that there's much more to Rock 'n' Roll than just half and full marathons? These days, runners of all distances can experience everything the Rock 'n' Roll series has to offer. Here are our top four reasons to run a short-distance Rock 'n' Roll race this year.

If you've never run a Rock 'n' Roll race before, you might be wondering what all the fuss is about. After all, other races have music too, right? While music along the course is common at most big races these days, at a Rock 'n' Roll race, it takes front and center. So instead of your neighborhood DJ blaring, "Another One Bites the Dust" on his home PA system a mile from the finish line, you can expect top live, local bands mile after mile along the course, and a killer line-up of big name bands all weekend long.

A diverse and impressive list of past headliners spanning top music genres has included acts like Martina McBride, Macklemore, The Wall Flowers and Trombone Shorty, to name a few. Every Rock 'n' Roll series features a great line-up at the after party, but for an amazing weekend of running and music, check out the Virginia Beach race series, which has partnered with the American Music Festival August 31 to September 2. Here, your 5K entry fee gets you a ticket to see top bands at AMF!

Get the Full Rock 'n' Roll Experience (With Fewer Miles!)

The Rock 'n' Roll race series isn't just the biggest in the world, it's also consistently rated among the most fun by runners themselves. Imagine winding your way along a race course through some of the most historic and iconic locales on the planet, then capping that off with a huge street bash or the world's biggest beach party. Race directors work hard to ensure that runners of all distances get to enjoy the full Rock 'n' Roll experience. And by running a shorter race, you'll be able to stick around and enjoy it longer than if you've just spent hours on your feet.

If you're looking for a destination race this year, the Rock 'n' Roll series has you covered with a line-up that includes some of the world's top cities. Visit Independence Hall and the Liberty Bell in Philly; check out Montreal's vibrant art scene; get a taste of southern hospitality in Savannah; or chill out in California's beautiful Bay Area. Whatever kind of travel itinerary you have planned, you're sure to enjoy sight-seeing a lot more on fresher legs following a shorter race.

A Race for Every Season

Frozen 5Ks and Polar Dashes aside, for the northern one-third of the U.S., the race season pretty much ends in October. But with the Rock 'n' Roll series, you can race year-round. If steamy and sultry is your thing, check out the Virginia Beach series in August. If crisp autumn air and the turning of leaves makes your feet fly, then jet on out to Denver in October. And when you're craving a winter warm-up in the middle of December, head down to San Antonio for the Rock 'n' Roll 5K or 10K.

No matter when, where or what distance you love to run, there's probably a Rock 'n' Roll race in your neck of the woods. And if there's not, traveling to one of its exciting locales just adds to the fun.

READ THIS NEXT: 8 Reasons to Run a Rock 'n' Roll Race