9 Reasons Why You Should Try a Folding Bike 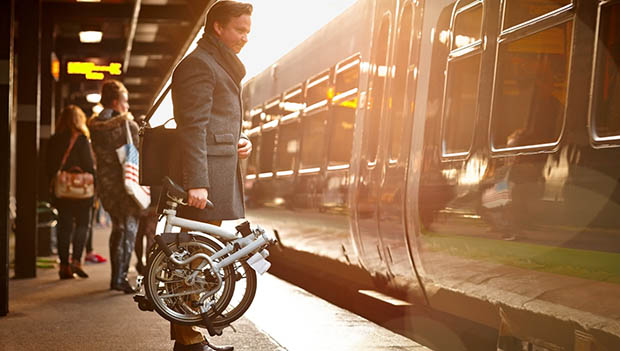 We're no strangers to folding bikes here at ACTIVE.com. But for those of you who haven't tried one, folding bikes are a bit of an enigma. Questions like, "What's the point?", "Do they ride nicely?" and "How easily do they fold up?" come to mind, and we don't blame you.

The short answer is because they're awesome. Not only has folding bike technology come a long way in the past few decades, but they're surprisingly fun and efficient to ride in certain situations (to and from the office or to the grocery store and back).

Here we share our love of folding bikes with you—from their reliability and portability, to their convenience and snappiness.

Just grab and go! Using a folding bike takes the headache out of dealing with a full-sized ride, especially in an urban environment. Unfolding and folding from start to finish takes less than a minute (trust us, we tested it), and once folded the bikes can be easily carried (which means you can walk with them through the office lobby instead of taking the back door or freight elevator).

Smaller wheels mean faster accelerations. While you won't have the top end speed (or top end handling) of a classic road bikes or hybrids, they have a snappy-quick feeling we can't get enough of—especially when navigating the stop-and-go of city streets.

Despite their size and moving parts, folding bikes are surprisingly well-built. They're designed to take the wear and tear of being thrown around on daily commutes, which makes them a little heavier and more durable than you'd expect. After the initial purchase, their cost of ownership is basically nonexistent—why deal with filling up with gas, car maintenance and parking costs when you can reliably reach for your bike on a daily basis?

If you're living downtown in a studio apartment, a folding bike is a great option—just fold it up and store it indoors without taking up too much real estate (a.k.a. you don't have to leave it locked up outside). And if you take the bus or the subway and have a bit of a walk from the last stop to the office or store, a folding bike can make that distance a little more manageable.

Like we mentioned, the smaller wheels make for faster accelerations, but it also makes for more nimble handling. This is important for managing the city infrastructure, from driveways and uneven sidewalks, to swerving around debris in the road or unpredictable pedestrians.

Ever see someone cruising through town on a folding bike and think, "Man, that's cool?" Folding bikes are great conversation starters, no matter if you're carrying one folded up through the office or are stopped at a red light. Some brands even host folding bike events where they have folding bike races and games, too.

We all know how sketchy it can be to leave a bike locked up on the curb in the city. Because you can store folding bikes inside, or fold them up and keep them next to you when sitting outside, they're a lot harder to steal than a classic bicycle. Or, if they absolutely have to be locked up, once folded, a lock can run through just about every "stealable" part of the bikes—making them safer to leave alone for a brief period of time.

Many brands offer stock base models of their folding bikes that can then be customized for your needs. This might include the paint job of your choice, a seat post extension, racks for over the front or back wheels, different gearing ratios or head and taillights.

Long story short, folding bikes are simply a lot of fun to ride. If you've never ridden one, you should—they're surprisingly efficient, handle well and are even comfortable on longer commutes. Folding bikes also keep a high resale value, but we know once you throw your leg over the saddle, you won't want to get off.

READ THIS NEXT: Why the Do-It-All Bike Has Become So Popular