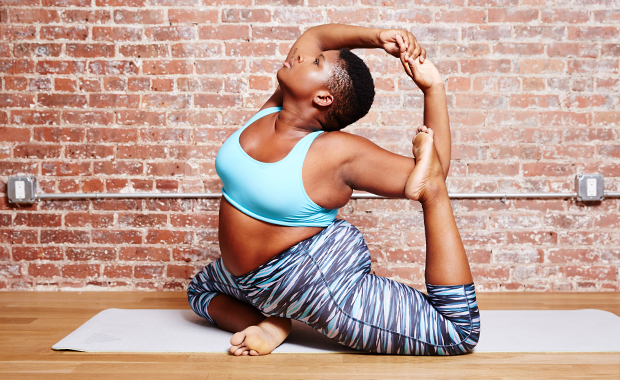 If being a yogi means being thin, using fancy equipment and wearing the latest Lululemon leggings, then Jessamyn Stanley is the anti-yogi. The self-described “fat femme” is redefining what it means to be a yoga practitioner, one Instagram post at a time.

Stanley, who has 123,000 followers on Instagram, posts photos of herself in intricate yoga poses wearing nothing more than her underwear. Her message: yoga is for everyone.

“There’s so much message conveyed by a fat girl in her underwear practicing yoga," she says. "It says so much. It takes a single image, and you can change someone’s mind forever.”

For the North Carolina native, the body positivity movement is more than just rhetoric. It’s about displaying your own body proudly, curves and all, even if it makes others uncomfortable.

“I feel like the reason people feel uncomfortable about fat people is because they are not confronted with the fat body,” she says. “What they see is a covered up thing that someone else is ashamed of, but if you take off your clothes and you say, ‘actually I’m fine,’ it’s confronting that person.”

She applies the same logic when using the word fat. For Stanley, using the word strips it of its negativity, making it a word that describes how someone looks rather than who they are.

“I think it’s pretty clear that I’m the textbook definition of fat, and I’m comfortable with that and I think other people should be comfortable with that,” she says. “The most important thing that other fat people can do is to really label themselves for what they are so we can take the power out of this adjective.”