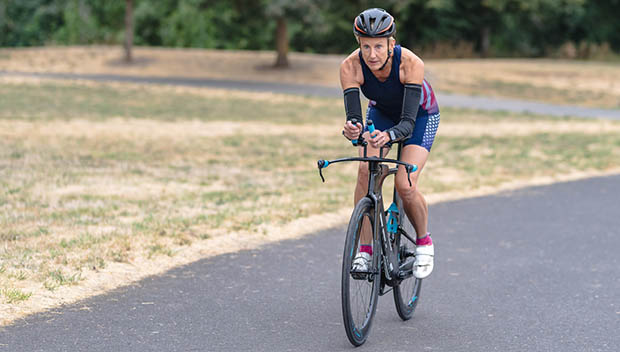 Even if you’re an accomplished triathlete with hundreds of races under your belt and a shelf full of age-group podium trophies, we all remember our first triathlon.

If it went off without a hitch, lucky you. For the rest of us mere mortals, our first races are often filled with embarrassing stories of getting lost, wearing the wrong gear or run-walking our way through the last few miles to the finish line.

But that’s triathlon, and as much as we love to hate a bad performance, it’s a level playing field for all involved. We all have to race on the same course with the same conditions, with only varying differences in gear and experience levels. Like anything, the more you practice and race, the more comfortable and familiar it’ll become (notice we didn’t say, easier).

While we’d all like a second shot at our first race, these experiences serve as a foundation for future races, where lessons learned make us faster, stronger and ultimately help us have more fun out on the course.

Brace yourself: Here are nine mistakes all first-time triathletes make.

Hosting a triathlon isn’t cheap—it takes a combination of athlete registration fees and sponsorships to make it happen. Like a moth to the flame, the race expo oh-so-conveniently connected to packet pickup will attract many a new triathlete to the “shiny new this” or “tasty new that.” These pro-endorsed gels and bars are often tempting, and new triathletes often will buy a few to use the next day. Be careful. While you may not have had any issues after trying the free samples, you don’t know how your body will react to these new products under the stress of the race.

As with nutrition, many new triathletes will find a new pair of running shoes or wetsuit at the race expo and attempt to race with them. Unless you’re familiar with the gear, it’s more likely that it will hamper your performance rather than improve (as promised) because you’re not used to the mechanics, or issues like blisters or chafing might arise. Stick with what you know, even if that’s a crusty surfing wetsuit and a pair of old cross trainers.

Losing Your Bike in Transition

We all remember the first time we see T1—it’s a sea of bikes, ranging from top-shelf carbon aero machines, to old mountain bikes that have seen better days. While it might seem straightforward when racking your bike and setting up your transition area, things get a little less clear after a hard swim and even harder run up the beach. It’s not uncommon to see new triathletes (and even experienced triathletes) backtracking in T1 trying to find their bike they passed.

If possible, try to rack your bike next to a noticeable light pole or sponsor banner to make locating it as easy as possible. Of course, buying a brightly colored helmet helps, too (and helps your supporters spot you on the course).

Pro tip: The pointy end of the helmet goes in the back, as does the zipper on your wetsuit. Whether it’s the heat of the moment or simply a lack of experience, all new triathletes make gear-related mistakes during their first few races. Take time to familiar yourself with the gear you plan on using on race day during training sessions leading up to your big day. If not, be prepared to be heckled as you run out of transition looking like a spandex-clad unicorn.

Swimming plus cycling plus running often equals a whole lot of rubbing. Add salt, sweat, sand and who knows what into the equation, and you’ll have a painful situation before you know it. Many new triathletes cross the finish line not just limping from physical exhaustion, but also from fighting through the pain of chafing and blisters. Pro Tip: Use Body Glide on everything—neck, under arms, crotch, etc.

Gun goes off at 7 a.m., so you can get there at 6:30, right? Wrong. Many first-timers are caught off-guard by how early competitors show up to the transition area. It’s a complicated morning, first dealing with an early wake up, followed by breakfast, bathroom stops, finding parking, getting body marking, setting up your transition area, etc. Feeling rushed on race day is no bueno—don’t be the rookie who shows up late.

Nobody likes to exit the water or dismount the bike near the back of the pack, and new triathletes too often get frustrated and try to keep up with their competitors (or get too hyped by the energy of the race), only to blow up and crawl their way to the finish line. It’s important to remember to race at your own personal pace (maintain the pace you’ve trained at), and you’ll have a much more successful and positive experience to build from.

If you’ve never tried a flying mount, your first race (or first few races) isn’t the place to try one. We’ve all seen the new triathlete who has overestimated their abilities to not only botch this maneuver, but have a race-ending accident. Keep it simple.

We’ve mentioned this briefly above, but this also applies to gear. New triathletes don’t need a superbike and high-performance wetsuit—start with the basics and work your way into these upgrades to really reap their benefits.

Not Saying “Thank You”

While you yourself will be the only person swimming, cycling and running your way to the finish line, triathlon is truly a team sport. It takes a village of mentorship and support both through training and on race day to help a triathlete cross the finish line. Many new triathletes are so caught up in the spectacle of it all that they forget to thank the people who helped them along the way. This includes family members who have to deal with your hangry moments (and smell), race volunteers pointing you in the right direction and your race-day Sherpas who lugged your bike pump around all day to just get a glimpse of you on the course for 30 seconds.

READ THIS NEXT: 9 Things to Avoid During Your First Triathlon